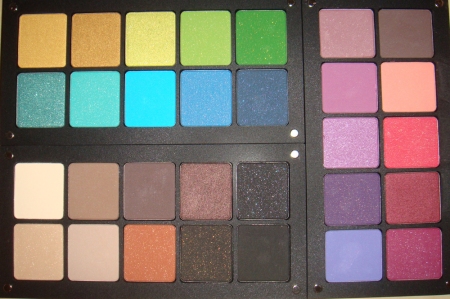 Colours and sparkles have always been my kryptonite.    I recently heard of a make-up retailer called Inglots through a very positive review/rave by xsparkage on Youtube.  I was so excited when I saw it.  You have to understand that I’ve spent A LOT of money on eyeshadows, and sometimes I regret purchasing them because the quality is low.  It has very little to do with brands.  What I mean is that either they don’t stick properly to the skin, they lack pigment, the texture is chalky, they don’t blend well, or they are not true to colour.  I’ve pretty much settled for MAC shadows as the safe route because they are relatively affordable for me with my pro discount, and they work well.

When I first heard of Inglots, the first thing I did was search up their website.  I’m practically a pro at online shopping =D  I was a wee bit disappointed that you couldn’t make orders online, however they can take orders by phone and all orders over $150 ships for free.  It just so happens that I was planning my trip to Las Vegas at the end of 2010, and I decided to look up locations of make-up retailers not in British Columbia.  I literally screamed with excitement when I saw that Iglots was at the Forum Shops at Caesar’s Palace.  My sister came running into the room wondering what the fuss was about.  When I told her, she informed me that there used to be a location at Metrotown but it closed (she’s guessing) due to lack of business/popularity.  WHY? WHY?!?!  I guess it’s not as flashy as Sephora, and MAC was their main competition.  Now there are only 3 locations in Canada and they’re at the other end of the country.

Anyways, enough of the story.  I got to the store and spent about an hour (probably longer) trying to choose my colours, and I’ve settled on the 3 palettes – neutrals, yellow-blue, purple-red.  Here are my lists of PROs:

That’s it!  All in all, it was one of the best parts of my trip.  I’ve found my eyeshadow palace and I’m staying for awhile =)

4 thoughts on “Every colour of the rainbow!”