During my short vacation, I arranged a photoshoot with some beautiful people (inside and out).  As a bridal make-up artist, I do a lot of neutral looks, which I think is beautiful, but my fashion/creative side has been subjected to confinement for so long.  I took this opportunity to release as least some of it.  My co-worker, Allan Cruickshank, is an extremely talented photographer and he set up a full-on studio at my place.  Since I just let my creative energy burst out that day, the three looks are completely unrelated, which is why I’m doing separate blogs for each.

So the first look is on the lovely Angela!
I was informed by her cousin that Angela has a fool-proof theory about posing for pictures and she definitely delivered!  I love to use make-up to bring out a different personality out of people and do a look they normally wouldn’t do.  But at the same time, the looks I choose to do on a model is inspired by what I see in that person.

The make-up is dark and dramatic with a bit of colour-blocking.  I had always wanted to accessorize make-up with a little something more and I was inspired by Pixiwoo to add crystal beading to make this look pop.  I had originally wanted black beading but I decided on this the night before the shoot so I used whatever I was able to dig up, which ended up inspiring the colouring of the shadows. This rocker style look wouldn’t be complete without the hair.  I opted for a glam curly faux-hawk which I think Angela pulled off like no other!

Here are some shots taken outdoor using natural light rather than studio lighting: 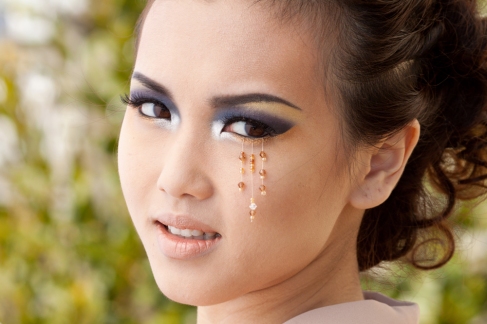 Check out more of the shots in my creative gallery!